Chuck Palahniuk does weird like no other author I read.  Some of his stuff makes Naked Lunch read like Goldilocks.  You’ve got to love the chances he takes with his characters and – to some degree – with his readers.

The sequel to the 2012 novel, Damned has been officially announced, and it’s Doomed.  The news broke over on The Cult, and pre-orders will soon  be accepted for the October 8, 2013 release by Random House.

Here’s the official pitch for Doomed:

Having somewhat reluctantly escaped from Hell, she now wanders the Purgatory that is Earth as a ghostly spirit, seeking her do-gooding celebrity parents, fighting the malign control of Satan, recounting the disgracefully funny (to us, anyway) encounter with her grandfather in a fetid highway rest stop in Upstate New York when she . . . oh, never mind, and climaxing in a rendezvous with destiny on the new, totally plastic continent in the Pacific called, not at all accidentally, Madlantis. Dante Alighieri, watch your back, Chuck Palahniuk is gaining on you.

The next novel will follow Madison back to earth as a ghost, doomed to haunting her parents for a year.  In flashback we see her earlier childhood, including the death of the kitten whose dead body subsequently clogged the plumbing of the Beverly-Wilshire Hotel.  That death is not Madison’s doing, but another death is.  Whether it’s murder or self-defense, as a ten-year-old Madison kills someone horrifically, and that’s the most-likely reason why she was damned in the first place.  We also begin to recognize a centuries-long conspiracy engineered to train and test Maddy for her role as the savior of all spiritual beings.

Oh, I forgot to mention it but the world ends in this next book.

As always, when it’s Chuck, I’m in.  Therapy has finally helped me block out all memory of reading Snuffed, and I’m good to go.  Bring on more Madison.

If you’ve been even a semi-regular reader of the Life64 blog, you know that I’m a fan of Chuck Palahniuk’s writing.  He’s put out some of my favorite books, including Survivor, Haunted and Choke.  One thing about Chuck that’s different from so many other authors is how accessible he makes himself to the public.  More than that, he is willing to share his experience with struggling writers.

Granted, Chuck is not everyone’s cup of tea – he takes huge risks in some of his stories that cost him readers, but the ones that stick around are a loyal lot.  If you have never read Chuck and want to give it a go, I’d recommend Survivor, Invisible Monsters, Choke, or Fight Club.  I would never recommend Snuff or Pygmy to anyone, ever.

In this post, I just want to share some of that Chucky experience I’ve gleaned from the corners of the internet.   Some of this advice is common sense and some is opinion, but it’s coming directly from Chuck and I think it is worth considering.

A warning about the following clip:  Chuck discusses research for his novel, Snuff, which is a gross story.

The value in this for me (starting around 1:35) was his insight on the social model and characters, with reference to Fight Club, and fiction that resolves itself by killing a character.

Chuck on how to research gangbangs for Snuffed (via TWRpodcast)

And though I expect no one except hardcore Chuck fans to be interested in this, the following video is Postcards from the Future: The Chuck Palahniuk Documentary, an 89 minute film made in 2003.  It’s about Chuck, his books and what people think of Chuck.  It is full of Chuck and all sorts of Chucky goodness.

If you want a highlight moment, click in around 17 minutes and catch Chuck talking about transgressional fiction.

Clocking in at 28:43, this is Chuck reading the entire story, Romance, previously published in Playboy Magazine.  I wish I was brave enough to write with such abandon.

The Pitch: From Fight Club author, Chuck Palahniuk comes a love story for our time: After his girlfriend dies from cancer John finds himself overweight and thrust back into a hopeless world. When a girl who claims to be Britney Spears hits on him, he can’t believe his luck. She looks like a supermodel and parties like Hollywood. The only reason she doesn’t dump him for someone more attractive is he keeps the party rolling… or at least that’s the story he’s sticking with.

I dig it when an author reads his own work and this was like a rare scotch to me  – or like a zucchini canoe filled with Iroquois.   However you want to look at it.

Note that Romance has been made into a short film by Andy Mingo.  Check it out, here.

The author described his latest novel, Damned, as; “if The Shawshank Redemption had a baby by The Lovely Bones and it was raised by Judy Blume.” And “it’s kind of like The Breakfast Club set in Hell.”

For me, Damned (by Chuck Palahniuk, Doubleday, 2011) was a wicked twist on Alice in Wonderland.  On fire.

Off with her head!

The story begins at an ending – Thirteen year old Madison Spencer dies. And thus begins Madison’s odyssey as she finds herself in hell, damned for all eternity and trying to make the best of it. Written in Palahniuk’s smarmy style and telling the entire story from young Madison’s perspective, Damned is outrageous, funny, and unapologetically vulgar.

Begin at the beginning and go on till you come to the end: then stop. 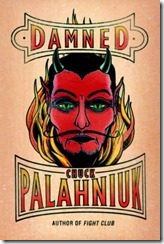 Once in Hell, we explore. There were points in the story where the characters go for a walk, just to see the sights, it would seem. Hell as it is depicted is a place filled with oceans of stomach bile, plains of dandruff and mountains of fingernail clippings. It’s a place where candy is the currency. It’s the place where telemarketers really call from. And it’s Hell, where you go when you die if you were bad. If all this seems unimaginative, there was a rationale to it and when you finish the book, you will have gotten exactly why Hell is the ridiculous place it is in Damned.

As I read, there were spans of chapters where I couldn’t discern a clear direction. Chuck has the gift of fooling the reader into thinking he is winging it, only to show at the end he knew all along. It’s a little unsettling, like a driver just turning loose of the wheel while driving down the highway to get something from the backseat. I’ve read every novel Palahniuk has written and I’ve gotten used to it. That’s the thing about reading Palahniuk’s books… you wander and either you revel in it or you get mad. I chose to revel.

I think I should understand that better, if I had it written down: but I can’t quite follow it as you say it.

In truth, this character is exactly like the main characters in his previous novels and the story trademarks all make another appearance – social disaffection, caustic violence and gross-out humor, but isn’t that why we pick up his books? You will either revel in it or you get mad.

Tut, tut, child! Everything’s got a moral, if only you can find it.

In my opinion, this is some of Chuck’s finest writing. Make no bones about it, Damned is a weird book that goes well beyond the realm of absurd and straight into freak show. It is satire at its most tasteless and extreme. You’ve got to be okay with that or you won’t make it very far in Damned. I liked the way the character grew and changed and how things were explained in the end. It wasn’t a huge reveal that blew me away but I found it satisfying. I also got some great laughs, particularly the part around the telemarketers in Hell who schedule their calls to customers at dinner-time. “Just a quick survey on what qualities you most appreciate about lip balm.”

Damned is not a new classic nor is it perfect. On more than one occasion, it completely grossed me out. If you go at it with an open mind and trust the author to tell you his story in his way, at his pace, you’ll be fine. If you try to figure everything out and make sense of what’s going on, you’ll just get mad.

I recommend it with the caveats mentioned above but be warned, the very last line in the book is, “To be continued.”