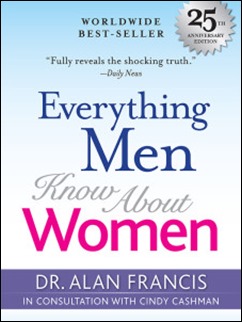 The 25th Anniversary edition of the “worldwide best-seller”, Everything Men Know About Women by Dr. Alan Francis, has been updated and revised to reveal all we, the male gender, know about the opposite sex.

Yes, it’s a joke.  Apparently, it’s an old joke, now in its 25th anniversary, and plugging along just fine.

I can see the comedic value in a physical book, sitting in the open so some unsuspecting sap picks it up and flips through the pages, seeing there is nothing written on them.  What I don’t understand is the e-book version, which sells for $3.82 on Amazon.  Seriously?

Anyway, the joke just gets better and better:  This book is in the Amazon top 100,000 books.

That means that a book with no words in it at all outsells my book, and hundreds of thousands of other legitimate books on Amazon, for that matter.

That’s depressing.  Or is it?

With only $3,000 and determination, Cindy Cashman and a partner started a publishing company and published the world wide best seller EVERYTHING MEN KNOW ABOUT WOMEN (written under the pseudonym of Dr. Alan Francis).

Cindy knew that marketing the book would require the type of original creative thinking not usually taught in MBA schools. She recognized that selling through traditional booksellers would be a hard sale, as it would get lost among the thousands of titles. Therefore, she developed a marketing plan to sell outside the book industry and stores bought them by the thousands.

On the strength of this initial success, they published ten original books and sold over a million copies to become one of the most successful self-publishers in the country.

Well played, Cindy Cashman. You are living up to your surname.

Notice I never disputed the accuracy of the book’s premise?  Really, pretty spot-on, if you ask me.  Since the pages were blank, I just wrote the word, “boobies” on every page.  Sometimes I drew a picture.  I’ve also scratched out the title and renamed it, Booby Traps.

I expect to sell millions.