One of the things that I like about analog gaming is that you get together and interact with real people, face to face. While the video game medium has come a long way in adding a social aspect to the gaming, it simply does not compare to the richness of a real-life experience with friends, sitting around the table and gaming together, albeit competitively. 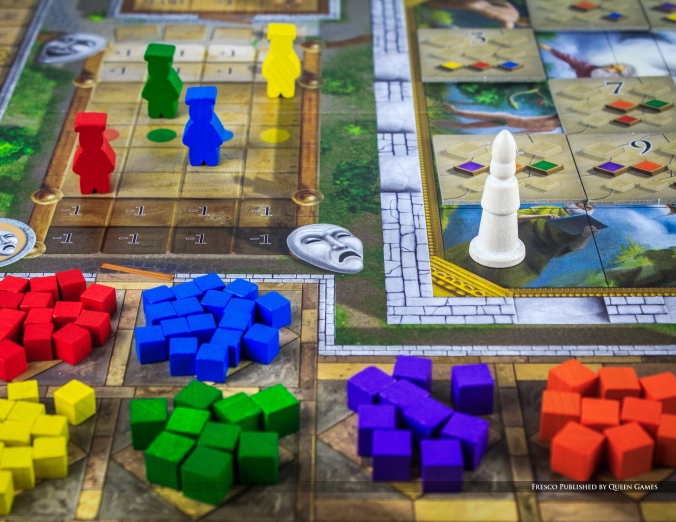 Problem: Can’t join my gaming group to play board games

Recently, I had a life-altering event that more-or-less severed me from my gaming group. I had responsibilities and loved ones to care for, so going out to meet with friends wasn’t going to happen. I was able to host a game or two at my home but it was infrequent and less than ideal, considering the circumstances. With no sign of conditions changing, how am I going to get my gaming fix?

Solution One: Digital versions of board games

Steam has a number of very good digital versions of popular board games – Scythe, Terraforming Mars, and my personal favorite, Through the Ages, are all available and allow you to play computer AI or with other players. I also was playing digital board games on my iPad. I signed up with Board Game Arena – a free-to-use website with many digital versions of board games that players can start or join, playing with each other.

At any given time, I have 6 or 7 turn-based games going on Board Game Arena, doing turns once or twice a day in each. This is a distracting way to play because each time I come back to a game in progress I have to backtrack and see what I did, what opponents did, and try to remember my strategy. I’m not playing my best. In fact, I lose most games on BGA. There is an option to play live, playing the game through in one sitting, but I have lots of distractions that require my immediate attention and pull me away from the game, sometimes long enough that I get ousted from the game and I get “bad player” ding on my user profile, warning others that I abandon games prematurely.

So, I can’t play live games without risking getting dinged for being AFK for too long, and turn-based is difficult for me to play well on all but the simplest games, such as Love Letter. It’s better than nothing but it’s far from great.

I started by pulling out a couple of older cooperative board games – Shadows over Camelot and Defenders of the Realm. Both of these games require the players to work together to defeat a threat that is driven by the game itself, often through random card draws that cause some negative impact that must be dealt with. The players all win or lose as a team. Shadows Over Camelot has a traitor aspect, with one player that might secretly be trying to cause the others to fail. Obviously, you can’t do that solo but other than that, the games played fine, solo, with me taking the actions for multiple players working cooperatively. Still, these are games that shine with more players, all deciding together and often arguing about the best course of action. Without that interaction, it really was a shadow of itself.

I moved on to some of my Euro multiplayer games that had a solo mode. These games usually have an automated (or Automa) player who takes actions based on card draws or some other method. Automa usually doesn’t adhere to the rules but simply take resources, moves, or just gets points each turn, giving the player an opponent that might gum-up his plans by taking a spot he wanted or something similar.

Teotihuacan: City of Gods, was the first one I tried. It was a new game I had never played and I wanted to get it to the table. It played fine solo. I also played Wingspan, which had a very competitive Automa that I found very challenging. Then I moved on to Terraforming Mars, which has no automated player at all – you just try to complete all the objectives in 14 turns (12 with Prelude expansion) and get your highest score possible. I enjoyed all of these more than I did the first two Coop games but again, I felt like I was practicing for a game with real players rather than actually playing the game.

Now, I have to mention Gloomhaven here. Gloomhaven is the #1 game on Board Game Geek and deservedly so. It’s basically a campaign-level dungeon-crawl that can be played solo. The thing is, it’s absolutely huge. The box weighs in at over twenty pounds. It has hundreds of components and over 2000 cards. I found it overwhelming to set up and play. Each time I would start, I’d be 30 minutes into setup and get distracted. I think I played it once and I’m sure I got key rules wrong. I loved the game but my time is a premium commodity and spending an hour to setup and teardown a game is too much.

Recently, I picked of The Lord of the Rings – Journeys in Middle Earth, which, for me, scratched the same itch without the burdensome commitment Gloomhaven requires. It is a diceless system, like Gloomhaven, but there is a distinction. Journeys in Middle Earth has an application that must be run on iOS or PC that gamemasters as you progress through the adventure. I’m only 3 scenarios in (there are 12 in the base game) and I’m really enjoying it. It can be played as 1-5 players, using 2-5 characters, and as an IP, it’s hard to beat TLOTR.

This is my truth but it doesn’t mean there is a right or wrong. You may feel differently about it and I’d like to know your thoughts, below.