Kemet by Matagot is my favorite area control board game and it’s one of my favorite games, ever.  Over multiple plays, I’ve come to really appreciate (yes, that’s the right word. APPRECIATE!) the game’s mechanics and design.

Is Kemet a game you, too, will APPRECIATE?  I don’t know, but let me run down the reasons why I like it and then you can decide if those things appeal to you or not.  First though, if you don’t know what Kemet is, we’ll start with the vendor’s description. 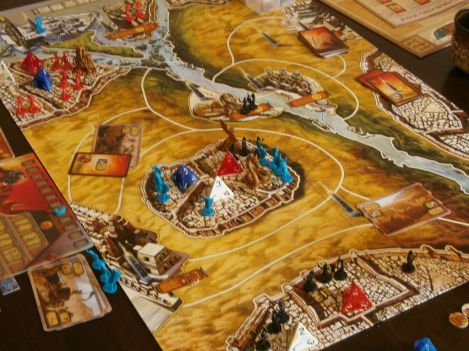 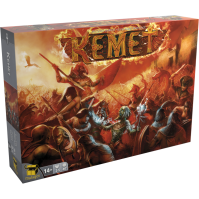 In Kemet, players each deploy the troops of an Egyptian tribe and use the mystical powers of the gods of ancient Egypt – along with their powerful armies – to score points in glorious battles or through invasion of rich territories. A game is typically played to 8 or 10 victory points, which may be accrued through winning attacks, controlling temples, controlling fully-developed pyramids, sacrificing to the gods, and wielding particular magical powers.

The conquest of the land of Kemet takes place over two phases: Day and Night. During the day, choose an action amongst the nine possible choices provided by your player mat and perform it immediately. Once every player has taken five actions, night falls, with players gathering Prayer Points from their temples, drawing Divine Intervention cards, and determining the turn order before the start of the new day.

As the game progresses, they can use Prayer Points to acquire power tiles. Some of these enroll magical creatures and have them join their troops. In addition to intimidating enemies, these creatures provide special powers!

Detailed miniature components represent the combat units and the supernatural creatures that are summoned to enhance them. Combat is resolved through cards chosen from a diminishing six-card hand and enhanced by bonuses.

My 12 Reasons Why I Think Kemet is Awesome

So, that’s it. I could elaborate in detail on all of these points but really, why? My goal was to give you an insider, slanted overview of the game and what resonated with me. That doesn’t mean it will resonate with you and that’s perfectly fine. If Kemet does seem to be your thing, maybe I’ll see you at the table and as always, I’m interested to hear your opinions