I Observed
By Mitch Lavender

I took the card from him and shoved it in my pocket without looking at it.   At an event like this, people handed out business cards like they were throwing confetti.  I’m nobody to these people but they don’t know that.  Because I’m so disinterested, they assume that I’m important.  That’s my bad.  They used to call it socializing.  Now, it’s networking.  Now, it’s opportunity.  Now, it’s as good as it gets.

His name was Dale Staire.  Something in the way the incandescent light reflected off his name tag made me think of the EKG machine flat-lining in my father’s hospital room when I was twelve.  I decided to look him in the eye.  It was twenty minutes later that I broke free from the conversation with Dale Staire. It turns out Dale was a makeup artist (or the way he would say it, ‘artiste.’)   I broke away by dominating the conversation with things I knew from the research I have documented.  Things so horrible, Dale Staire was too shocked to respond.  He could hardly wait to leave my company.

Eyeliner.  You glue the monkey’s eyelids open so he can’t blink.  Then you apply the eyeliner directly to the eyeball with a paint sprayer and observe how the eye reacts to the irritant.  Did you know there is a high concentration of blood vessels in the eye?

Hair Spray. You put a monkey in an airtight, Plexiglas cube, and then displace the air in the cube with hairspray.  Soft hold.  Normal.  Extra hold.  Mega Hold.  Observe how long it takes the monkey to suffocate from the lack of oxygen.  And isn’t it interesting that Gentle Touch seems to be more toxic than The Mega-Hold?  It’s the fragrance.  Deadly stuff, that is.

Makeup base.  Fill a syringe with 50cc of base mixed with saline solution and inject it directly into the bloodstream of a monkey.  The spasms stop after 20 minutes, but death does not ensue for another 50 minutes.  The blood vessels in the temples and forehead sometimes rupture.

Makeup Remover.  Fill a syringe with 200cc of makeup remover and force it down the throat of a monkey.  After 12 minutes, the monkey will vomit up the makeup remover, along with its stomach lining, a half-pint of blood and part of its upper intestine.  Looks like Italian food, so help me, it does! 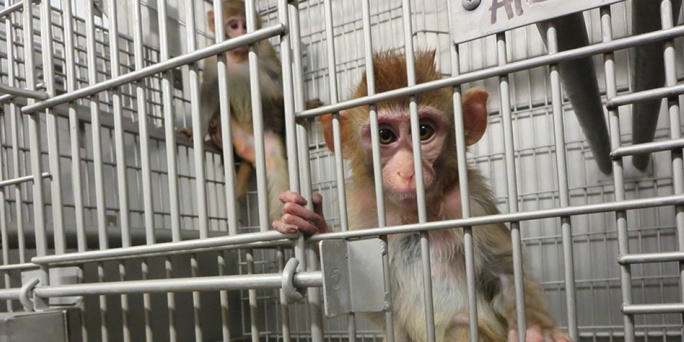 In biomedical language, the monkeys are ‘acceptable compromises to ethics for the greater good.’  Better animals than humans, right?  As if my company suddenly was to market our makeup remover as also being a great salad dressing.  As if.   Those 7 monkeys did not ingest makeup remover and puke their guts up for no reason, no.  It was precautionary.  It was to save human lives.  Enhance our lifestyles. Reduce lawsuits.

I’m sitting in my car and I’m thinking about this.  I’m thinking about the disgusted look on Dale Staire’s face as I listed off these documented findings.  I think about what a horrible person I am, and I jab the needle with 300 cc of makeup remover into my arm and thumb down the plunger, injecting the contents into my system.  I do this without pause, without remorse, without concern.  I’ve seen what this does to a monkey’s stomach, but I’ve never seen this tested intravenously.  Too bad there is no one here to record the results.

I thought back to when my father died.  My father had been breathing laboriously, but stopped.   The EKG machine showed a flat line.  The last words he said to me were, “You are horrible.”

I dangled the unplugged electrical cord for the life-support machine in front of my father’s inert eyes and listened to the steady beep of the EKG, searching for a pulse and not finding one.  After a few minutes, I plugged it back in.  The EKG searched in vain.  I didn’t smile.  I didn’t cry.  I only observed.

When I woke up, it was morning.  I had been slumped over the steering wheel.  I thought I would die.

I checked these boxes off in my mind; a mental clipboard of what I would do if I was at work.

Rain is drumming softly on the roof of my car and I looked out the windshield, the world softened into a blur by the rain.  It was comforting. I was parked on the street, and people are coming and going; umbrellas and raincoats.  Cars lazily creep by on the wet pavement.

My car door opens suddenly and a man enters.  It’s my father.  He gazes at me with lifeless eyes.  He’s holding an electrical cord.  The back door of my car opens and in come the animals; dogs, cats, rhesus monkeys.  There is my baby brother, holding a bowl of puree green peas.

The monkeys pause for a moment, but only a moment.  Then they move in on me and began to tear at my hair and face and bite my hands and arms.  The dogs ravage me.  A cat pisses on me… the urine smells like rancid onions.   My baby brother shoved a bowl of puree green peas in my face and as I involuntarily inhale the thick vegetable sludge, I feel an electrical cord go around my throat and pull tight.  I sputtered and tried to breathe, but couldn’t.  The cord, the puree peas, the cat piss.

The monkeys have already gnawed away part of my arm and are violently pulling on it, trying to tear it free at the elbow.   So much blood!

Fascinating.  I observed… as long as I could.

8 thoughts on “I Observed – a short story”