Since my son, Spencer loves racing cars, I hit BoardGameGeek.com and did some research, coming up with an interesting game called Formula D. Coupled with the review on Table Top with Wil Wheaton, I was convinced to pick up this box of cardboard and plastic and give it a whirl.

Formula D is a high stakes Formula One type racing game for 2-10 players where they race simulated cars with the hope of crossing the finish line first. This is a re-release of Formula Dé with several changes from the original format. 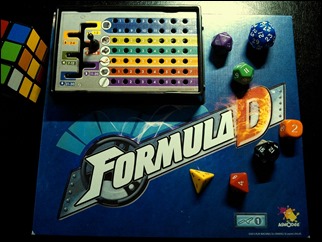 We’ve only played three games, but it is fun. I like the simple concept of shifting to higher gears allowing the player to roll a higher-sided die and potentially go faster, coupled with the challenge of the corners where you must end your movement 1, 2 or 3 turns to avoid damaging your car or crashing.

The causes a lot of upshifting, downshifting and braking to meet the criteria to not crash, but if too much damage is done to a particular component such as tires or brakes, you could potentially crash and be out of the game.

The game captures the feel of car racing without having to be a gear-head to enjoy it. I don’t even like car racing, but enjoyed playing this game. The concept is easy to grasp and has a decent strategy to chance ratio. Play it too safe and you’ll lose the race, but go too fast into a turn and you’ll crash. 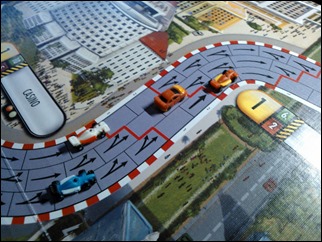 Then there is the Danger Die. This is what Wil Wheaton called it in his review and I like the name, but let’s face it – it isn’t that dangerous. Any time a car ends its movement next to another car, there is a risk of collision. The player must roll the d20 Danger Die, and if they roll a 1, there is a collision and take damage. That’s a 5% chance of collision, so happens rarely. When it does occur it causes 1 body damage, which is not that big a deal

Honestly, I thought the game was fun and liked the choices I had to make each turn and the pace of the game is lighting fast. There are options to make pit stops to replace tires and such, making multiple lap games possible and increasing the risks. 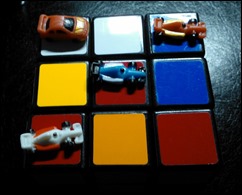 So, we’ve only played two games with three players, but I’d love to try this more players and more laps or the street racing rules, which have great options for characters and even police to start pursuing in the middle of a race. There are several expansions that include different tracks and I will be picking these up as I can. The game components are a lot of fun, too. I dig shifting gears on the little dashboard and when moving my car around the track, I can’t help making car noises.

All in all, this is a fast-playing, accessible game without a lot of intimidating rules. It even has a basic rules version (which we skipped) that make it simpler, still.

I rank this game up there with games like Ticket to Ride, Settlers of Catan or Roll Through the Ages. It’s a great game to play with non-gamers and is still fun for hardcore types. It’s a worthwhile addition to any gamer’s collection.