There are literally thousands of zombie books in circulation. There are zombie comic books. There are zombie movies and zombie TV shows. With such a proliferation of the dead rising to eat us alive – so many times, so many ways, so many mediums – what could possibly be done that hasn’t been done before?

How about an entire book, dedicated to dissecting zombies? 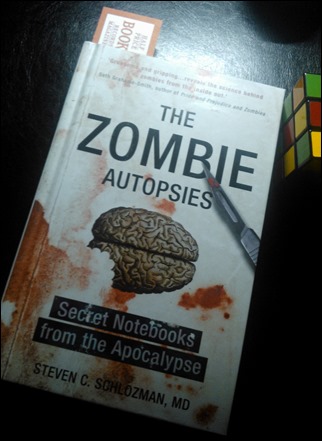 The Zombie Autopsies: Secret Notebooks from the Apocalypse by Stephen C. Shlozman (2011, Bantam Press – $11.90 on Amazon) is just that. Narrowing the genre of zombie fiction to the science and forensics of zombie biology.

Literally, this is a descriptive, illustrated book about cutting open the living dead and analyzing their biology in an attempt to understand why this corporeal impossibility could exist. While all zombie stories offer an explanation of how zombies start, (i.e., a virus, alien life form, voodoo, etc.) they don’t go into detail in quite the way The Zombie Autopsies does.

The premise is a journal kept by Dr. Stanley Blum – a neuroscientist investigating the medical causes of zombiism. Dr. Blum is already infected (as is two-thirds of humankind) with the virus that makes flesh-eating zombies. He retreats to an island overseen by the U.N. – to vivisect captive zombies in the hope of isolating the pathogen before he succumbs to it.

Stephen C. Schlozman makes the experience both accessible and plausible, and the story unfolds through the journal entries, as Blum proceeds with his experiments.  Schlozman is an assistant professor at Harvard Medical School and a child psychologist (!!!), and this background lends legitimacy to the subject matter.

Of course, this does not make for comfortable reading. As a zombie fiction author and reader of the genre, I found it fascinating. The detail and the sketched illustrations are the sort to make you want to look away, but it’s absorbing in its gruesomeness. It’s like a car accident that has fatalities, you have to look.

I picked this up at Half Price Books, and admittedly, it was the callouts on the back cover from George Romero, Jonathan Mayberry, Max Brooks and Chuck Palahniuk that convinced me to give it a go.  Well – it was Chuck’s quote that was persuasive to me, anyway. 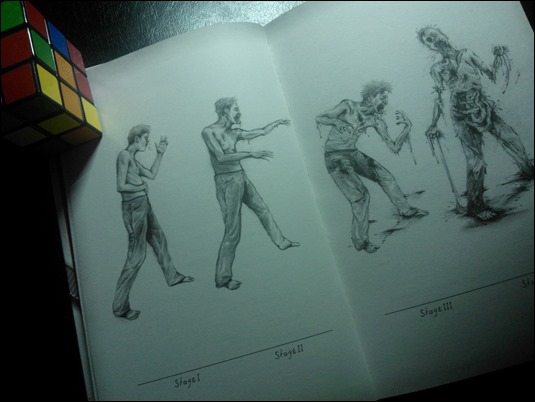 I dig this stuff, not because it is gross, but is spite of it. It probably goes without saying, but I’ll say it anyway: this is for die-hard fans of the zombie genre only. Others need not apply.

Recommended, with the caveats mentioned above.

Book teaser for The Zombie Autopsies